If by "suburb" is meant an urban margin that grows more rapidly than its already developed interior, the process of suburbanization began during the emergence of the industrial city in the second quarter of the nineteenth century. Before that period the city was a small highly compact cluster in which people moved about on foot and goods were conveyed by horse and cart. But the early factories built in the 1840’s were located along waterways and near railheads at the edges of cities, and housing was needed for the thousands of people drawn by the prospect of employment. In time, the factories were surrounded by proliferating mill towns of apartments and row houses that abutted the older, main cities. As a defense against this encroachment and to enlarge their tax bases, the cities appropriated their industrial neighbors. In 1854, for example, the city of Philadelphia annexed most of Philadelphia County. Similar municipal maneuvers took place in Chicago and in New York. Indeed, most great cities of the United States achieved such status only by incorporating the communities along their borders.

With the acceleration of industrial growth came acute urban crowding and accompanying social stress-conditions that began to approach disastrous proportions when, in 1888, the first commercially successful electric traction line was developed. Within a few years the horse-drawn trolleys were retired and electric streetcar networks crisscrossed and connected every major urban area, fostering a wave of suburbanization that transformed the compact industrial city into a dispersed metropolis. This first phase of mass-scale suburbanization was reinforced by the simultaneous emergence of the urban Middle Class, whose desires for homeownership in neighborhoods far from the aging inner city were satisfied by the developers of single-family housing tracts. 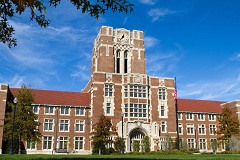